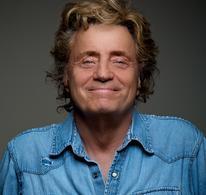 SHow did Shadoe Stevens, a guy described as not only white, but the technical term would be "Norwegian White," come to create a comedy show about a Black Entertainment Network?

Shadoe replies, "I love black music and everything about the culture. In my early radio career I did an all rhythm and blues radio show "The Jefferson K R&B Party" and later went on to build a global music network in the late 90s and early 2000 called RhythmRadio. It was called "The Sound of the World in a Good Mood," and was a celebration of rhythm, founded on the influence of African music throughout the world. And it might be worth noting that my wife is African American. We've been married nearly 30 years."

"For my next project, I wanted to create a comedy show built on Improvisation and saw this cast in The Black Version at The Groundlings Theater in Hollywood. I hadn't laughed that hard in ten years. They were absolutely brilliant.

I contacted the Director, Karen Maruyama. She too, is extraordinary. I'd met her years ago when I did a guest appearance at The Groundlings with Michael McDonald. Michael directed a movie I was in called "Bucket of Blood." I asked Karen if she thought the group would be interested in working with me on a Radio Theater-like Podcast Series. She asked. They liked the idea.

We got together to "workshop" the concepts I'd come up with: a parody of a Black Entertainment Network with a cable TV channel and a sister Radio Station. Within 30 minutes we were recording. The workshop materials were so funny we've used them in the series.

We record at The Rick Dees Studios in Los Angeles, I did the producing and engineering, and the sweetening and final editing are done by me in my ShadoeVision Studios.

I hope the rest of the world loves the work as much as we did making it. One of the hardest parts is to keep from laughing out loud in the middle of a session. This is a really amazing team."