Type yWhen he was on KMET, he'd written this little jingle called "a little bit of heaven, ninety four point seven"...that same day, the Pointer Sisters came is as guests on his show. He asked if they'd sing a jingle for him. They did it and it became iconic and was played over and over years after he left the station...in that same interview, they also did a second little number..in later life they became friends. 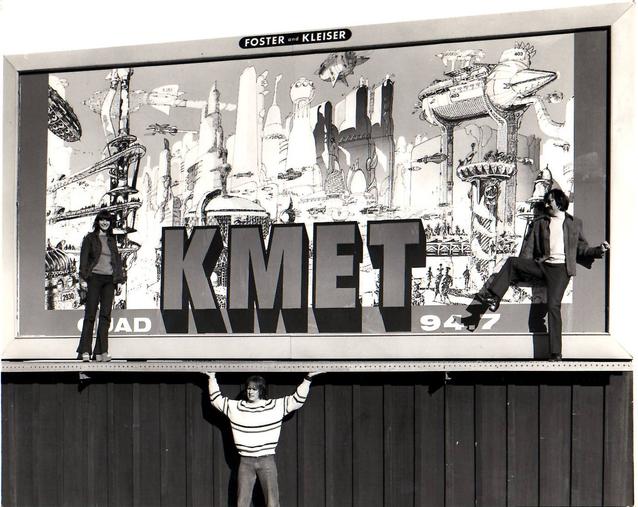 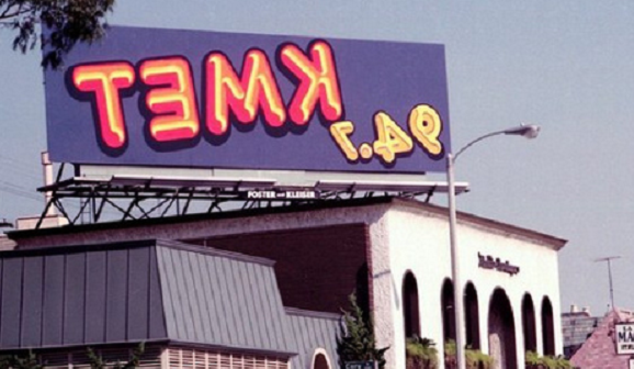 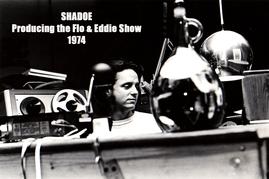 The upside down KMET billboard  concept came to Shadoe after an elaborate, retro-futuristic, Metropolis billboard he'd designed with artist Robert A. Nelson: "Hollywood seen from Mulholland Drive in the year 2525." So he had this idea of doing something completely different...something really simple with giant florescent letters but putting it upside down and backwards. The manager, L. Dave Moorhead said, "but they won't be able to read it!" It was a concept Shadoe would have to fight for.. Below is a black and white picture of the Hollywood billboard with B. Mitchell Reed, Mary Turner, and Shadoe. It was "QUAD" 94.7...remember QUAD? Below that one of the versions of the followup reversed billboard, and then the earlier Hollywood postcard.

Besides all up, all party, all cutting edge music all the time, one of the highlights and most exciting features of KROQ Am & FM (and later on KMET) was a show created by Shadoe, Mark Voman and Howard Kaylen (The Turtles, Mothers of Invention, and more) called "Flo and Eddie by the Fireside." It was a Sunday night Party.  Every week the show featuring the brilliant and hilarious Mark and Howard, at last one major rock star and any obscure reason to party, all produced by Shadoe. No song was ever played for more than 30 seconds...it was a collage of madness, included the first radio appearances of Rodney on the Roq (then known as Rodney and the Glitter People), and featured guests like Ringo Starr, Harry Nilsson, Joan Baez, Keith Moon, Alice Cooper, Suzy Quatro, Albert Brooks and many more. 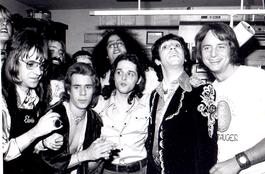 1. Promos that were broadcast on the AM station promoting the upcoming KROQ FM that was soon to be on the air. This is followed by the first actual audio when KROQ FM programming went on the air, Friday, November 16th 1973.

2. This is a showcase of one of Shadoe's favorite station promos when he launched KROQ-FM and AM in Los Angeles, together with the GOD JINGLE that used to be played at the top of the hour. The station was originally branded "Rock with a Grin"..."Muthah Rock" ...the term "World Famous KROQ" was used later and was originally a joke because the station was just going on the air and had few listeners. This is followed by one of the KMET promos and the iconic "Little bit of Heaven" jingle sung by the Pointer Sisters live on the Shadoe Stevens radio show.